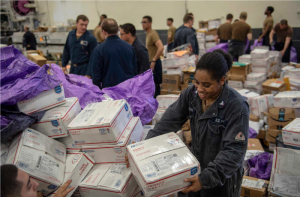 The arrival of mail aboard a U.S. Navy ship has traditionally been an event to be celebrated.  Sacks of mail would come over by highline from an oiler or would be waiting on a pier when a ship made a port call.

Aircraft carrier crews would anxiously watch the flight-deck imagery  on the closed-circuit TV system to see the carrier onboard deliver (COD) flight arrive with parts, passengers and, most importantly, the mail — with a collective sigh from every compartment if there wasn’t enough wind over the deck to land the COD.

When the mail was sorted, Sailors eagerly awaited the word passed on the 1MC, the ship’s general announcing system: “Mail call!” The mail would be brought to the divisional spaces and each article passed out one by
one as the lead petty officer called out the name.

A box from home would be noted by all, so the Sailor receiving it had to open it and share the broken cookies. A pastel and perfumed envelope would get a raised eyebrow from the LPO as a sheepish Sailor came up
to claim it. The murmurs turned to chuckles after the second and third scented envelope was delivered. The more experienced members of the division had their letters from home numbered in the order in which they
were sent. Moms and dads proudly opened notes from their children in scribbled handwriting.

According to the 1963 Navy Postal Clerk 3 & 2 Manual rate training manual, “Your function is to see that your shipmates receive all the benefits of the Postal Service. In performing this function, you will contribute greatly to the morale of your ship.” The Postal Clerk rating is
gone now and is performed by logistics specialists. But the function continues — as does its importance to the Navy and its personnel.

The jointly manned Military Postal Service Agency (MPSA) was created in 1980 to bring together the mail functions within the military services under a single mail manager and to serve as the military’s single point of contact with the U.S. Postal Service (USPS),  providing service in 55 countries and for forces afloat and deployed for contingency operations.

The Adjutant General of the Army serves as the MPSA’s executive director, charged with processing, transportation, and distribution of personal and official mail within the Defense Department.

Today, military personnel who handle mail must be authorized and trained to do so in accordance with Postal Service and Pentagon regulations. MPSA said 88,618 tons of packages and letters were sent or received by
overseas Soldiers, Sailors, Marines, Airmen and federal employees at about 1.2 million post office boxes, unit mail rooms, buildings and other delivery points in 2018.

Naval Supply Systems Command (NAVSUP) is the Navy’s representative to the Military Postal System. The Navy postal system moved 5.6 million pieces of mail in fiscal 2018, processed 36,000 documents, and handled
$9.4 million in postage and money orders. Quite simply, postal operations are a critical part of the Navy’s logistics systems.

“Postal touches customers every day,” NAVSUP Postal Operations Manager Dale Pinchart said. In 2013, the former Fleet Post Offices (FPO) in New York and San Francisco, with detachments in Miami and Honolulu, were consolidated into a single hub in Chicago, e, unit or ZIP code. Those FPO gateways are still there, and express mail, registered mail and surface mail still pass through New York or San Francisco, but those operations are not as large as they were in the past.

“Letter mail has decreased, but e-commerce has exploded. Our overall volume — and our workload — has increased,” Pinchart said.

Pinchart said the amount of official mail has also been gradually decreasing, but there is still a significant volume of documents and instructions. And many supply parts are still forwarded through the
postal system because it’s still the most reliable and cost-effective method.

Internet Doesn’t Deter Navy Mail Volume Mail delivery is still a much-anticipated event on ships. Even though the internet has replaced a lot of

the “snail mail” cards and letters, today Sailors are ordering a lot of items online. So, the volume of mail is growing exponentially.

In the Indo-Pacific area of responsibility (AOR) that covers 52 million square miles, NAVSUP Fleet Logistics Center (FLC) Yokosuka handles the transportation of all Navy mail throughout the Far East, covering 13 Navy postal activities and base post offices on Navy installations; the entire 7th Fleet; all USS and USNS, MSC and US Coast Guard ships visiting the 7th Fleet area of responsibility; as well as the U.S. Army at Camp Zama and at North Dock Yokohama and the U.S. Embassy in Tokyo.
NAVSUP FLC Yokosuka operates 16 Far East NAVSUP  postal activities from Guam to Diego Garcia, with 140 military, U.S. civilian and local national postal personnel who provide military postal service.

According to Capt. Frank Nevarez, the commanding officer of NAVSUP FLC Yokosuka, 22 million pounds of mail — much of it being packages from online retailers — is processed a year by the Fleet Mail Center in
Yokohama. “We support 180,000 customers and have $5 million in postal revenue annually,” Nevarez said.

The Navy manages its mail differently than the other services. The Navy’s bases don’t move, but Pinchart said Navy ships have always been somewhat of a challenge. “You’re trying to hit a moving target. You have to
anticipate where the ship or squadron is going to be, and hopefully have mail waiting for them on the pier, or have it delivered by air or during a replenishment at sea.”

Most Navy mail being sent overseas will travel by scheduled commercial flights. “It’s very reliable,” Pinchart said. Ships inform NPS where they will be by classified message so the mail routers can get the mail
to them at their next port or at sea.

“We route the mail based on the ship’s schedule. We don’t want to have the mail catch up to them in a port after they’ve left,” Pinchart said.

Military Sealift Command ships are also supported by the Navy’s postal system, but the function is carried out by the ship’s purser instead of by Sailors.

Technology has changed the charter of military mail. Online video chat has replaced the numerous cassette tapes that were once mailed back and forth. Sailors still receive “care packages” from home, but now online ordering has made it easier from military men and women to order what they want. Families living overseas used to order from the J.C. Penney catalog, but now Amazon and eBay make it easy to find what
they want.

Technology has changed the way the Navy moves mail.

Mail that is both received and dispatched is scanned to help track from the point of mailing to delivery. New technology, such as the Intelligent Locker System (ILS), Informed Delivery and Pier Lockers, is helping to
serve customers better, Pinchart said.

Now ILS lets customers pick up their mail from secure lockers 24 hours a day, seven days a week, and eliminates the need for customers to stand in line. The system provides an email barcode, which can be printed out or used with their cellphone to access their mail. ILS is now available in 19 locations and that number is growing.

Pinchart said “address standardization” speeds up the mail and improves accuracy. “All of our customers have a unique address, and it’s important to ensure their correspondents know what that address is to avoid delays.”

Pier lockers allow the base postal personnel to drop mail for a ship at a secure location at the head of the pier. While big ships with huge volume like aircraft carriers may not be able to use the lockers, they can
bring efficiency to busy ports like San Diego and Norfolk. “We’ll inform the ship that they have mail and give them the code so they can retrieve their mail. It allows us to streamline our routes, and we don’t have to wait for the clerks to come off the ship to receive their mail. They can get it whenever they’re available,” Pinchart said.

SendSuite Live (SSL) helps commands send large shipments by the most economical means. The command enters the package height, weight and destination into the SSL system and the software “shops” around to
find the lowest price. 

PREZ Al Hass found this article in a 1949 edition of “ALL HANDS.”

There is a lot of interesting information in this article that many Navy Postal Clerks can relate to, especially the more senior members of the NPCA.  Mail was still in in its heyday when Al joined the Navy in 1964, as he soon found out during his first assignment at Terminal Navy Post Office, Yokohama, Japan.  Yokohama, then as now, was a hub for the movement of Navy mail in the Pacific.

This is for all you Navy Postal Historians.  The first shipboard Navy Post Offices were established on 15 August 1908 aboard the USS Illinois (BB-7), USS Rhode Island (BB-17), and USS Prairie (AD-15).  As important as mail was back in the day, I imagine this was a big event. Thanks to PCCS (Ret) Jeff Gibbs for this tidbit of Navy Postal History. Shown below are pictures of each of the ships.
Al Hass 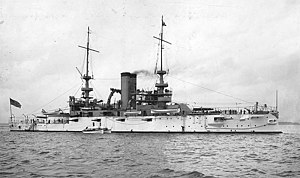 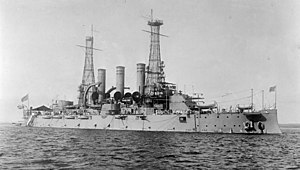 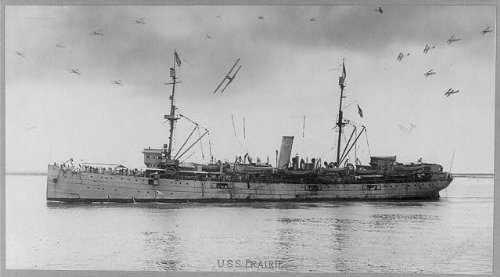 USS Prairie (AD-5)
History of the Military Postal Service (MPS) as documented at the Smithsonian National Postal Museum in Washington, D.C.  View information in the below URL for a great overview of the MPS.  Quite a bit of information pertains to Navy Postal Operations.
http://postalmuseum.si.edu/mailcall/1.html

Retired PCCS(SW/AW) CRAIG HOULETTE put together this recap of the Naval Postal Service History, bit of nostalgia for all