PREZ OUT AN ABOUT

While in the Pensacola, Florida area recently visiting family, I went to a local post office in Gonzalez to conduct business. 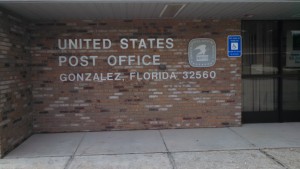 To my surprise I discovered that Al Bryant was the Postmaster of a town in the area where my wife grew up.  It was nice to see Al after many years.  We had a nice visit and plan on arranging a get together with other retired Navy Postal Clerks the next time I visit Pensacola. 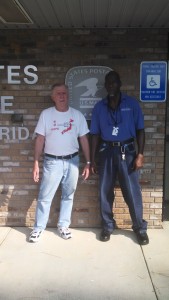 Al spent 30 years in the Navy. Some of his assignments were FMC Sigonella, Italy, FMC Naples, Italy, USS Constellation (CV-64), and the Military Postal Service Agency.  All of Al’s previous experience in Navy postal operations has made him a valuable asset to the U.S. Postal Service. 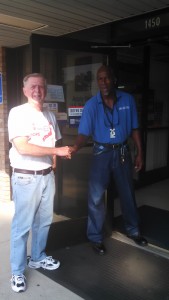 The Prez Visit to Buffalo, NY and Niagara Falls
During the “Your Military Reunion Connection” event in Nashville, TN in July of 2014 my wife Ruby and I had the privilege of meeting two individuals from Buffalo, New York who were promoting the Buffalo area.

Information they presented to us at the Nashville event indicated that Buffalo may be a good choice for a future reunion. Because my wife and I had already planned a personal trip to Niagara Falls, we were invited to Buffalo for a site visit. We took advantage of this opportunity and spent a total of three days in Buffalo and Niagara Falls, 14-16 September.

We were pleasantly surprised at what the Buffalo area had to offer. Upon arrival we visited the renown Niagara Falls and later visited again to ride the “Maid of the Mist” up to the edge of the Falls. It was interesting as well as beautiful. During our 3-day visit we also drove into Canada (Passports Required) and had a nice dinner.

On our second and third day we were provided a tour of the city of Buffalo. It was pointed out to us, and noted that the city is undergoing a major renovation with many improvements being made. Many businesses are relocating to Buffalo and state of the art medical facilities are under construction.

Part of our tour included a visit to the Theodore Roosevelt Inaugural Site, the house where President Theodore Roosevelt was sworn in as President of the United States following the assassination of President William McKinley in September of 1901. The first part of the house is a museum displaying many items from the 1901 Pan-American Exposition, including wine glasses, plates, playing cards, and the key to the Temple of Music. The last room is a recreation of the office President Roosevelt used during his presidency, and includes an interactive desk which can be used to send e-mails to yourself. I had my picture taken at the desk and received an e-mail copy with my picture, as President Hass, on the front page of a Buffalo Morning Express commemorative newspaper. Its a good thing I did not have to make any important decisions during my brief time as President.

We also visited the Naval & Military Park on the Buffalo Waterfront at Canalside. This location is where the Buffalo River and Erie Canal meet. Moored there is the USS Little Rock (CLG-4), the only guided missile cruiser open to the public; and the USS The Sullivans (DD-537) and USS Croaker (SSK-246). The USS The Sullivans was of particular interest to me. This is the ship named for five brothers who, while serving aboard the light cruiser USS Juneau during the second world war, lost their lives in the Battle of the Soloman Islands. They were from my home state of Iowa.This was the greatest military loss by any one American family during World War II.

I was told that you cannot make a trip to Buffalo without visiting the Anchor Bar, the location where the now famous Buffalo wings originated. So we did, and enjoyed some of their wings! Then the night before our departure we capped our visit by having coffee and desert with one of our NPCA members, Ron Stevens and his wife Margaret.

My wife and I plan on going back next year. Great place for a reunion or visit!

Don’t forget the casinos; two on the US Side, one in Niagara Falls, NY and one in Buffalo, NY. There is also a casino in Canada at Niagara Falls. If interested, visitors can also take a trip down the Erie Canal through the locks.